So this is my 3rd Reptile – S800, after the 2nd one took a nose dive in the dirt. I decided to buy the foam kit. But, in future I’ll just get the full kit version. Sure, you may save around £5 by just buying the foam. But you also have the hassle of having to source the carbon rods; and the other parts you forget about that come in the kit. The postage alone for the replacement main spar was more than I saved from buying the foam only kit.

Unlike my previous Reptile – S800 builds, I decided to go for the black V1 kit this time. There ‘s really not a huge difference in foam density. It seems like a glossier finish though. Maybe that’s just where the grey one is used and all the mould release is well and truly gone. From building, its seems like the black kit isn’t as well fitting as the grey. This is strange, as I would have thought they would use the same moulds. But there seems to be gaps that I can’t remember being there with the grey foam.

It will be a rebuild of my old Reptile – S800. The only change I’m thinking of making is to swap the M8N puck for a BN-180/220 as they’re quicker at getting a lock and smaller. With that, I should be able to move the stack back a fraction and get a bit more space for batteries, as the cable was always tight. I’ll probably also laminate it.

The UK has, and still is, in lockdown because of the CoVid-19 pandemic. Which has given me plenty of time to work on my RC models. As I write this, the S800 is almost finished. I expect to have it ready to go today, as I can’t start on the Nano Goblin til it’s done. So what have I done?

My first job was to trim the foam and glue it all together. This is pretty standard for a build like this, so I won’t go in to detail for the process. But for reference, I used medium viscosity E6000 to glue everything together. Then it was a case of installing the servos and cutting the foam to accept the VTx and Rx. For servos, I have gone for MG90Ds this time. These are great servos, with huge amounts of torque. I have reviewed them in my group servo test. But they will be getting their own review once the new test rig is ready.

This time I’m using an ImmersionRC/FatShark sized VTx, so have created a bay cover for that. It has an air intake in the direction of airflow, and exhaust port which force the air between the circuit boards.

Once again I’m using the L9R, so that was almost a copy of the last install. The main L9R cover is exactly the same. This time I changed the antenna setup. On the last build, I used a downloaded thing to create a V for the L9R antennas on top the model. This time, I have buried one of the antennas in the foam. The second antenna stands vertically, giving the 90 degree diversity offset. I’m thinking this should create less drag on the wing. As you can see in the image, the antenna is flush with the foam and under the laminate.

I guess the next thing I could mention is the tweaking of the hatch. It looks very similar to the old one. But, the top part walls are slightly thicker, and I have increased the size of the air intakes and exhaust vents. This has been achieved by slightly raising the top, but also by sculpting the lower part of the intake. I’ve added a few options. You can have additional exhaust vents on the rear deck of the hatch now. Additionally, you can have spikes on the front edge, to grip the foam. The hatch in the photo has both options.

As this is a rebuild, all the electronic parts are the same as the last Reptile – S800. The motor is a RacerStar/T-Motor Air A. This is powered through a RacerStar Tattoo+ 52A ESC. I am running DSHOT and have also hooked up the ESC telemetry for RPM and ESC temperature. The flight controller is a Matek F405-STD, which sits on an FCHUB-W PDB. I like this setup because you can build in stages. Most of the connections are made to the PDB it’s self. Which on this model makes wiring up the ESC much simpler. I decided to keep the same GPS, as I wanted to experiment with the magnetometer. I have moved it in to the wing, away from the hatch magnets and ESC.

My VTx is powered through a 12V regulator, which then passes through an LC filter. The video signal is passed with coax this time, to see how this setup handles noise. This time, I’m powering the FPV camera from the VTx’s 5v out. The video signal from the camera will also use a coax cable. This time, I have opted for a Foxeer Razer camera. I really wanted to test this out, as it would be great to have a more budget friendly FPV camera. The Predator is about 2.4 time more expensive than the Razer. But on paper, the Razer has similar specs, certainly to the older Predators. It’s just missing an in-cam OSD. It will be a good thing to test.

The only other thing on this build that is changing is the choice of action cam. I will now be running a GoPro Hero8 Black. It fits better in the nose section than the Hero5 Session, and seems to me more protected. It is heavier. To counter this, I will move the motor back on longer standoffs to hit CG. 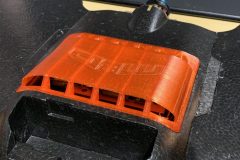 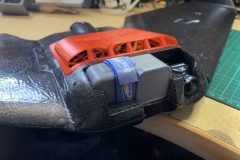 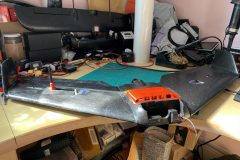 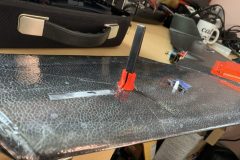 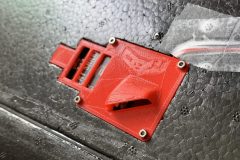 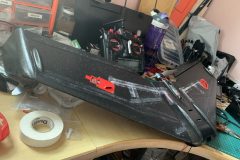 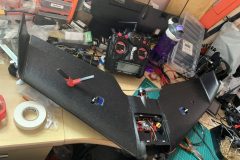 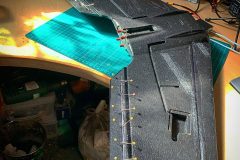 I was kindly given this Mini Drak by Justin, who is giving up the hobby. This one has a Vector air speed sensor very nicely embedded in the fuselage at the wing joint, so this Read more…

This wing was kindly given to me by Justin, who is leaving the hobby. This one is still in a pretty unassembled state. The body has been glued and sprayed with 3M 90, ready for Read more…

I was given this Mini Drak by my good friend Dan as spares. He said it had never flown, but had crashed a lot. I think that if I can get the wings apart, it Read more…