As this is the first RC plane that I’m building, I thought I’d document the build along the way. Here I’ll share my thoughts behind my decisions on what I do and the components I’m using.

I’ll put a complete list of the parts that I’m using here. If I change a part, I’ll update the link to the latest product I’m using in the built aircraft, but will keep the links to original parts as some people may prefer to use them after seeing my reasons for changing. For clarity, some links are affiliate links.

I’m also designing some 3D printed parts for the S800. This is my first attempt at designing and printing my own parts, so please bear with me. In fact, I didn’t even have a 3D printer when the S800 arrived, so it’s all very new. As I’m working on the parts, I’ll put links up to the Fusion 3D models so that if people are interested, they can check out my progress. As I finish parts I’ll put the Thingiverse link here too. Please note that the files in the Fusion links are completely untested, in other words, don’t download them and print them. Once I have a proven, printed, and fitting design, I will post the Thingiverse link and feel free to print them as much as you like.

The first step is to trim all the excess foam from the edges of the parts. Some parts have large lumps that need removing, but most just have a thin seam along the edge where the mould joins; therefore I removed all the excess with a scalpel. The first image is the fuselage after trimming. The second images shows the rest of the parts after trimming them the next day. 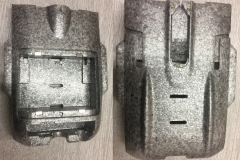 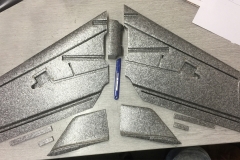 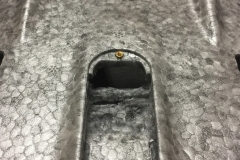 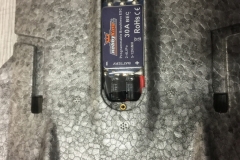 Seeing a few build videos on the S800, I knew that the BNF kit comes with a quadcopter ESC, and also that these aren’t really desirable in a plane due to the lack of airflow. I looked on a HobbyKing for the smallest, lightest 30A plane ESC I could find on a reasonable budget. I eventually settled on theHobbyKing 30A Blue Series ESC, which is only 24 × 25 × 9mm and weighs 28g.

To fit this in the bay, I had to trim the side edges and make a deeper recess at the front. It fits in pretty snugly, but I plan to 3D print a new cover for the ESC compartment with an air scoop to aid cooling. The heat sink of the ESC is facing the bottom, where the air scoop will also be situated.

Carbon up the wings

My next step was to glue the carbon spars into the wings. Following some damn good tips from Matt from the YouTube channel Rag the Nuts Off, I used pins to hold the spars in while the UHU POR set. 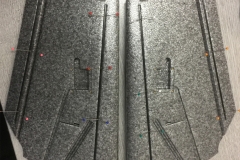 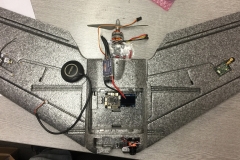 I then wanted to lay out the parts over the S800 to get an idea of placement and cabling. I’m not too keen on the GPS module, as a result I have decided to change it for a same spec part that will sit on the FC stack. This will mean that one wing will be heavier than the other, so I will make the heavier wing the left wing which may help counter torque roll a little.

The next job was to assemble the motor mount, which involves gluing 2 pieces of balsa together and then gluing a piece of carbon fibre to the balsa assembly. The next step is to attach the optional motor mount extension. The reason I went for this is 3-fold. 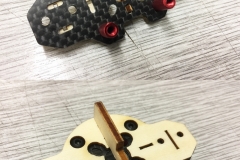 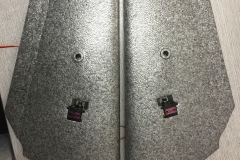 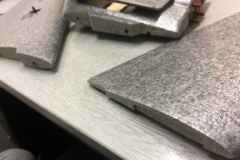 I temporarily mounted the servos. The holes in the wings needed to be cut out slightly to accept the servos and cable.

I also sanded all the edges that are to be glued together, including the wing, winglets, and carbon spar covers.

I have discovered new evidence that this mod will not extend the range of your receiver, it may even reduce it. Don’t tune your antennae without using frequency analysing equipment. I’m leaving it on the page for the sake of history, but please leave your antennae the length that you get them.

The story of my mistake

I had a delivery turn up, and one of the items was an X4R-SB for another aircraft, so I thought it was the perfect time to do the 1/4 wavelength mod on the R-XSR. Like the regular XSR, the R-XSR has a 1/5 wavelength antennae. By converting them to a 1/4 wavelength, you gain signal strength, and therefore range. For a proof of concept range test on this, check out this video with StingersSwarm & Mr Steele. With the XSR there is only one way to perform this mod; however, with the R-XSR you also have the option of buying X4R antennae and replacing the R-XSR stock antennae. I went down the XSR route …because I’m cheap, but also like the shorter antennae.

In image 2, you can see the first step of the mod. I held the X4R-SB antenna next to the R-XSR antenna, making sure the antennae are straight and the tips are level. The next step is to carefully remove the black outer casing of the R-XSR so that the exposed inner antenna is the exact same length of the X4R-SB. I gently cut mine with a scalpel, but whatever you use, go slow and gentle, you don’t want to lop the whole thing off.

Next (image 3) you want to un-plait the shielding all the way down to the black casing. Once un-plaited, carefully cut the excess shielding away with small, sharp, precise snips. Again, be very careful not to cut the antenna.

Once you’ve done that, repeat with the other antenna and the mod is complete (image 4). If you are unfortunate and snip off the antenna by mistake, you can try again by cutting the black casing off by the length of the required exposed antenna. The length of the final black encased part of the antenna doesn’t actually matter. 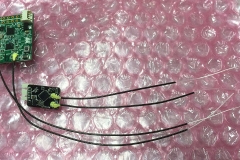 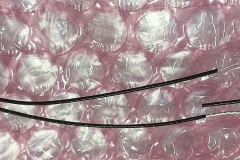 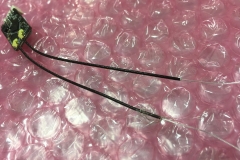 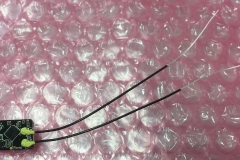 But, to clarify… DON’T DO THIS MOD.

Finishing up the build

Unfortunately I got pretty slack with documenting the build, mainly due to the limited time I had in the day to do the building and wanting to get as much done as possible. However, I thought I’d use this section to bring you up to speed on the build, then go in to more detail below on certain aspects. The aircraft is now complete, other than some fine tuning, and has had a single maiden flight; no, it didn’t crash.

A couple of changes

There have been some changes to my plans; the main change being the removal of the OLED display. The reasoning behind this was 3 fold.

I printed myself a new FC stack holder (V1) and got to work. Unfortunately this decision had been made after completing all the soldering and almost finishing the build. The following sections will detail some aspects of the build that I think may be useful. All of it is retrospective, and some of the images will be taken from the completed aircraft. Please ignore the empty place holders, the content will arrive shortly.

Right, the first thing I’m going to mention, before I forget, is that if you’re using an Omnibus F4 Pro from Banggood or the like, the LED signal is not in the specific LED 3 pin header! When the board was produced, they made a bit of a cock up with the circuitry. Instead, you have to wire it to the PWM 5 pin (not so good if you have something that needs more than 2 servos, like a plane) and use the specific OMNIBUSF4PRO LEDSTRIPM5 source. This had me confused for ages, so thought I’d get that out the way first.

For the LED mod, I used 2 of the CJMCU strips listed at the top of the page. The process involved holding the strips against the back of the fuselage and marking where they sat. I then cut a recess in these marks so the LED strips would sit flush with the motor mount. I wanted the wiring to be completely hidden, so I found the longest drill bit I could, and drilled a hole in through the EPP. If you look at the motor mount, there is a circle cut in the middle where you can see the vertical wood support and the EPP either side. I drilled in the left side of this hole and aimed down and to the left. When it came time to poke the wires through, I taped them to a piece of carbon rod and pushed that through the hole.

With the wiring, again I wanted it neat, so I tried to make all the connections in the centre, near where the wires will go through the fuselage. This works fine for the 5V and GND, but the signal needs to be in serial. So in the left trench, I cut a little deeper, enough for the signal cable and ran that along the back of the LED strip. Here’s a diagram for the wiring to make it easier to follow.

The S800 is no more! I made a change in iNav which I thought was to give a little more roll angle in angle/heading hold modes, but I actually changed something else which severely messed up the flight controller. From launch, the S800 was all over the place and very skitty. It had gotten some height, so I was bringing it down …too quickly (newbie error, don’t fly a plane you know has an issue at full throttle), but it refused to pull out of the dive (40 degree dive with full up elevator from 200ft up according to the blackbox). It smashed into the ground at about 126mph, ripped off a wing, pulled the motor and ESC off which in turn yanked the flight controller stack through the bottom of the fuselage (which thoughtfully unplugged the battery). This was on a dry day, when the ground had been dry for a week, yet the force was still enough to embed EPP into the ground!

Most of the parts actually survived, the only casualties being the GPS module, the flight controller (sockets were pulled from the board), the battery (which they side profile went from a square to a parallelogram), and the action cam. The new S800 was ordered straight away and has arrived. There will be a new build page at Reptile S800 Sky Shadow V2 Mk2 where I’ll go over changes I’ve made for this build as well as trying to cover parts I missed from this build. 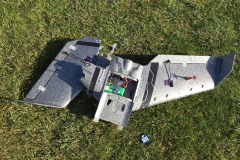 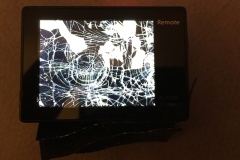 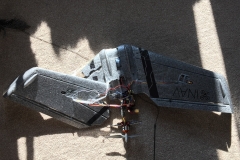 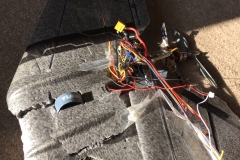 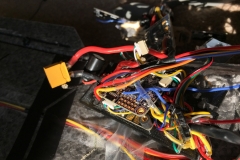 So this is my 3rd S800, after the 2nd one took a nose dive in the dirt. I decided to buy the foam kit, but I think in future I’ll just get the kit version. Read more… 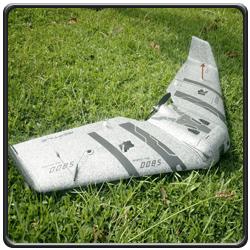