The Nano Goblin build is a pretty straight forward iNav build. The biggest issues arise because of the access hole that you have to the back of the fuselage. There are, however, some aspects that you need to be mindful of when you’re choosing your components; the biggest issue seems to be the selection of the VTx.

The Nano Goblin will fly on 2S LiIon or LiPo packs. LiPo packs discharge to 7.2V, but LiIons can go lower than this. Most VTx’s on the market operate between 7V and 24V; but below 7V limits your choices. An all in one, 25mW FPV camera is an option. But, some of us want more power. A 7V VTx will stop working on a LiIon once the voltage drops below 7.5V-7.3V.

I hunted around for a while to find the best solution I could, and I came across the RunCam TX200. This stand-alone VTx is powered by 5V, can output 25mW or 200mW, and has access to all the frequency bands including Race Band. There is even a version that can use SmartAudio. The only issue is that it has no audio and comes with a stock dipole. The TX200’s dipole connects using a U.FL connector. I ordered a TBS Unify Pro U.FL to SMA pigtail, which allows me to run any antenna I want. I’m using the Lumineer AXII stubby due to its small size, low weight. I’ve been impressed with it on other models.

Installing the pigtail was straight forward. Just mark on the fuselage where you want the antenna and put a hole through the same size as the black shielding on the bottom of the SMA connector. Poke the pigtail through the hole and draw around the brass fixing plate so that you can cut a small recess for the plate to fit in. Once cut, and test fitted, glue the pigtail in place. Pay close attention to the orientation of the U.FL connector, see the close up image. With the pigtail forward towards the nose of the aircraft, I have my U.FL connector facing down. This is for 2 reasons:

Attaching the VTx to the U.FL is one of the last things I did. It was easier to connect the cables externally and use the dipole for testing. With regards to connecting; the TX200 has a plug for 5V in and ground and a plug for Cam in, 5V out, and ground. I cut the 5V out and ground wires on the cam plug close to the VTx. Make sure they don’t touch anything (hot glue does the trick). I then took the camera in wire and attached that to the VTx port on the Matek F405. The 5V in and ground went the 5V and G of the Matek F405, between the VTx and Cam pads.

The Micro Eagle is a good fit in the hole on the nose of the model; however, you will have to make a few tweaks. The Micro Eagle has a full size lens, which adds a bit of weight, but also gives a better picture. I knew that I would need to add nose weight; so better to have useful nose weight than just a bit of lead. You will need to cut the lens hole to accommodate the bigger lens and remove a bit of material for the connector.

I have chose to attach the cable for the OSD and leave it inside the model. That way I don’t need to disturb the camera to change any settings; the cable is just loose inside the fuselage. Wiring the camera was much the same as the VTX; the Video out wire went to the Cam pad on the Matek F405. The power and ground connections to the same 5V and G pads as the VTx. This ensures I have video all the way down to 5V.

Initially I was going to use an Omnibus F4 V3 that I had spare. But, I had issues getting it to work with my FrSKY receivers, so I’m suspecting the inverter may have issues. The F405 was supposed to go in my S800 Mk2 build, but got put in the Nano Goblin as I knew I’d finish that sooner. Something else came over from the S800; I had some test flight controller stack holders lying around. So I cut one down as small as possible to glue in to the bottom of the Nano Goblin. There are 2 reasons for doing this:

The FC was rotated by 90° so that the USB port and SD card slot are facing forwards. In the iNav Configurator I added 9° to the roll axis (actually the pitch as the board has been rotated) to get hands off, level flight in horizon mode. The holder is aligns so that the rear screws are just accessible behind the carbon spar.

For wiring everything up, I’ve directly soldered to the board. The ESC signal goes to pad S1. 5V and ground from the BEC goes to 5V and ground on the Matek F405. With the servos, the signal wires go to pads S2 and S3. The servos power and ground goes directly to the BEC. I also have a pair of wires going from the XT30 connector to the VCC and G pads on the F405.

The Beitian BN-180 is connected to UART 1 on the Flight Controller. Tx to Rx1, Rx to Tx1, VCC to 5V, and G to G. On the BN-180, the cable closest to the G cable is the TX, this is also the closes non-power cable to the TX LED. On the lid of the Nano Goblin there is a circular moulding recess. This is the ideal size and place to put the double-sided foam pad that came with the BN-180. The orientation of the BN-180 doesn’t matter, so long as the ceramic antenna is facing up. I chose to have the cable coming out the back.

I decided to mount my R-XSR to the side of the fuselage and have the antennae exit directly on to the wing. One antenna is extending straight out and the other facing rearwards along the fuselage. I may change the rear facing antenna as I think it’s a bit close to the carbon spar; it might change to extend forwards towards the nose.

The R-XSR is connected on the SBUS pad and UART 4’s TX. The SBUS wire from the receiver goes to the SBUS Pad. The SmartPort wire goes to Tx4. Power comes from the 4V5 pad, and ground to G. There’s no need to do any hardware inversion hacks. Just enable SoftSerial and Telemetry and you should be good to go.

With the 2S 3000mAh LiIon pack (home made using LG HG2 cells) installed at the front of the nose, the Centre of Gravity is perfect. For using the NanoTECH 1500mAh 2S LiPo, I had to add 20g of weight to the nose end of the pack to hit CG.

I’m using a standard iNav setup. The preset for the Z84 wing is used for the initial rates and PIFFs. Then added the slightly altered Fixed Wing CLI mods. My procedure is to:

My base setup script

Here is the majority of my setup script for different versions of iNav. The OSD settings aren’t included as they’re all personal preferences.

I gosh-darn broke it!

My plan for this Nano Goblin over the winter was to changing some parts out to make it lighter. Those plans have now completely changed as I didn’t pull up when I should have. I was having too much fun flying low!

I will still be making a lighter Nano Goblin. The plan is to buy the kit version and transfer the stock motor, ESC, and servos over from this Nano. I didn’t want to make this the light version as repairs and extra glue doesn’t make for a light build. There will be light weight build details on the new Nano’s page. Briefly I’m looking at an F405-MINI, Predator Micro, R9 MM or Crossfire Nano, and Unify Pro 5V (heavier, but more power), to give an idea.

But what about the crashed Nano?

So, what’s happening to this Nano Goblin if it’d be too heavy with all that glue and repairs? Well, if it can’t go light, it might as well go fast! I’m looking at a 6S setup with bigger servos, balsa elevons, and a bigger motor. It’s all in the planning stages still, but I’ll post up the details here when I start doing stuff. First thing I will do is cut up the plane so that I can repair the wing and replace the spar. I’m thinking that I may add a 2nd spar for extra strength. 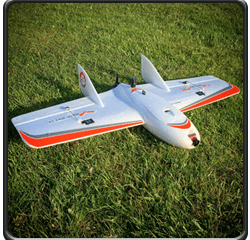 This is the page for my second Strix Nano Goblin. The goal is to make this model sub-250g with a 2S LiIon pack. ReadyMade RC finally got the kit version of the Nano Goblin back! Read more… 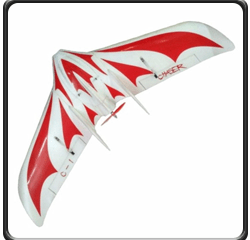 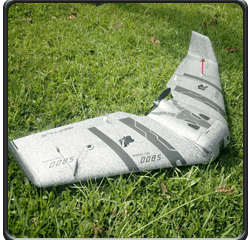